An excerpt from Nothing More Comforting: Canada's Heritage Food by Dorothy Duncan

I light the prairie cornfields Orange and tawny gold clusters And I am
called pumpkins.
Carl Sandburg, "Theme in Yellow" 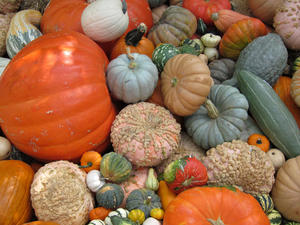 Squash is the name we often use in Canada to include a wide variety of vegetables that grow throughout the western hemisphere. They are native to the Americas and were known and grown by the First Nations long before the arrival of explorers from other countries. Evidence of squash dating from 7,000 to 5,500 B.C. has been found at the Ocampa Caves in Mexico, and from there it would have travelled north. In the eastern United States, two-thousandyear- old burial mounds have yielded up similar evidence.

Among many First Nations, squash, beans, and corn were known as the Three Sisters.They were grown together, the corn standing tall and straight, the beans climbing the corn stalks, and the squash spreading out to control the weeds. When they were harvested, they were often eaten together to complement one another.

Early European explorers searching for the treasures of the Indies found instead the culinary treasures of the Americas, including squash. Although usually associated with North American cooking, squash was also carried to other parts of the world. In Great Br …