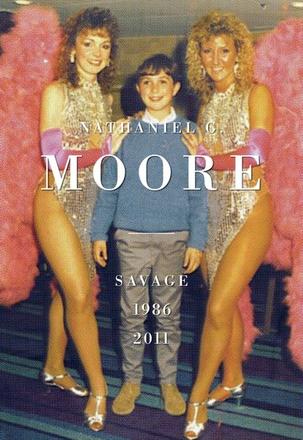 Nathaniel G. Moore's Savage 1986–2011 is not simply a way for its author to jump on the autobiographical-novel bandwagon, thank you very much. Nope, he's in it to win the Giller Prize. Here, he explains why, and also gives us the lowdown on the "monstrous gelatinous blob of middle-class meatloaf" that is his latest novel.

In 2009, Mark Medley at the National Post wrote “Nathaniel G. Moore will never, ever win the Giller Prize. He probably considers this a badge of honour.” Maybe he’s right. It was spot on enough that I wasn’t nominated in 2010, and The Walrus favourited or tweeted the Giller punch line the day the piece came out. Medley continued by describing me as “a writer so far removed from the CanLit conversation that he might as well be writing in another language.” The point of the piece however, was, from what I can surmise, that I was and am satisfied living as a big fish in a tiny small-press pond. But what if he is wrong and I truly am trying to win the Giller Prize each time I put publishers through what I put publishers through? So comes Savage 1986–2011, my first book in four years and what I can honestly say is my best work.

Hooray; now do I win?