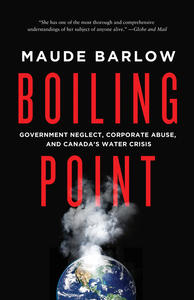 Maude Barlow's Boiling Point: Government Neglect, Corporate Abuse and Canada's Water Crisis is a self-described "cry from the heart" from one of the world's foremost water activists. "Passionate and cogent, this could be the most important book of the year for Canadians." We're pleased to feature an excerpt here, and along with a list of other remarkable books on the subject of water.

For over three decades, I have travelled the world, learning about water, learning that abundance is not a given, and that the future of the human race and the species with whom we share this planet is literally dependent upon it. I have stood in solidarity with those fighting for water justice in their communities or trying to save endangered lakes and rivers from contamination, overextraction and corporate malfeasance, and I am always amazed at how far away these struggles appear to be to most Canadians when I return home.

For make no mistake, the world is running out of accessible water. On World Water Day 2015, the UN reported that demand for water will increase by 55% over the next 15 years. By that time global water resources will meet only 60% of the world’s demand. A 2016 report from leading scientists warned that two-thirds of the global population currently lives with …