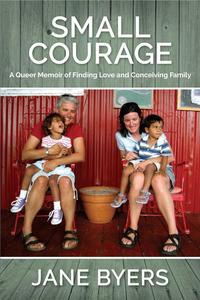 Jane Byers' book is Small Courage: A Queer Memoir of Finding Love and Conceiving Family, a thoughtful and heart-warming examination of love, queerness and what it means to be a family.

Here, she shares other parenting memoirs that have inspired her.

This memoir by Fernie, BC–based novelist struck a chord with me. Both Angie Abdou and I are parents of sporty kids. Her romp through a year of her 10-year-old son playing minor hockey resonated with me, having played recreational hockey, but I hadn’t navigated the pitfalls of that mythical Canadian hockey-parent culture. I found myself bristling at the same things Abdou bristled at, and, as a former athlete, also being conflicted acknowledging the great things about sports and specifically team sports, but recognizing also the detrimental effects on our youth of a sport’s particular culture.

This memoir follows one hockey season, the divide-and-conquer parenting that often accompanies having a child in hockey, and the toll it takes on a relationship.