Moon of the Crusted Snow: A Recommended Reading List by Waubgeshig Rice 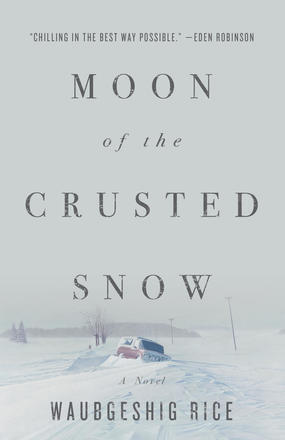 Waubgeshig Rice's new novel is Moon of the Crusted Snow, which Eden Robinson has called "Chilling in the best way possible." In this post, Rice tells us about the book and shares some of the titles that influenced him as he wrote it.

Moon of the Crusted Snow is about a northern Anishinaabe community faced with a crisis in the wake of ongoing healing from the impacts of colonialism. It’s a post-apocalyptic story about a people that have already endured the end of their world. A widespread blackout shakes the community to its core, but its residents eventually learn it’s a much more catastrophic and violent event in cities and towns to the south. Soon, foreign visitors from those places come into the community to seek refuge, and eventually, attempt to impose their own control.

While the story explores post-apocalyptic and dystopian themes by modern North American standards, it’s also looks at upheaval as a chance for rebirth and renewal for the Indigenous people at the centre. As modern infrastructure disintegrates, the Anishinaabeg in Moon of the Crusted Snow turn to the land, culture, and traditional knowledge for survival. Family and community are at the heart of their existence and their ability to persevere in the midst of this chaos. It’s also an …