"A raw novel of sex and drugs in the years just before rock 'n' roll, Hot Freeze moves from the highest Westmount mansion to the lowest Montreal gambling joint and nightclubs. "

Richochet Books is CanLit like you've never seen it before. An imprint of Montreal's Vehicule Press and edited by Brian Busby, the series brings hard-boiled noir detective novels of the 1940s and 1950s back into print. The latest title is Hot Freeze, by Douglas Sanderson, which is forthcoming this fall.

We asked Simon Dardick, Co-Publisher of Vehicule Press, to tell us more about Ricochet and its origins, and just how they come up with the series' incredibly distinctive cover art. 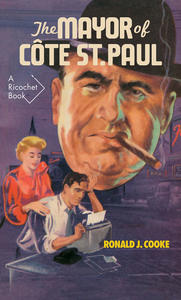 "A novel about Montreal during the not-so-halcyon era of a couple of decades ago when gangs and girls made rum-running and slot machines big business."

49th Shelf: How did the Ricochet Books series come to be (and get their name)?

Simon Dardick: Collecting Canadian noir mysteries from the 1940s and '50s has been a passion of mine for over 20 years. Aside from being attracted to the genr …