How We Imagine Ourselves, by Howard White

"I started incubating a theory of literature which held that mastery of expression could occur as readily in an upcoast bunkhouse as in an ivory tower in some great city in a past age."

At the second Geist Evening of Dinner and Diversion held in February 1994, Howard White—founder of Harbour Publishing, author, and Officer of the Order of Canada—gave a talk that Geist later published and which knocked the socks off a good many people. "How We Imagine Ourselves" is one of those pieces of thinking and writing that has never left us—it remains a stunning articulation of why place-based stories are so important to how Canadians understand ourselves.

We are delighted that Geist has given us permission to publish "How We Imagine Ourselves" here.

When Geist first approached me with the idea of speaking here, I made it known that of all the things I ever wanted to be when I grew up, being an after-dinner speaker was very low on the list. They took this seriously and called me up a few days later to say that they had taken care of the problem by arranging for me to give most of my talk before dinner, which was not quite what I was getting at, but there’s not much I wouldn’t do for Geist.

I grew up in a logging camp in Pender Harbour, B.C.—I w … 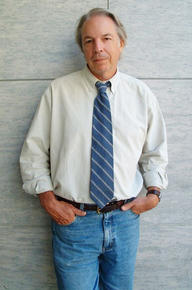 Drawing on over three decades of experience, one of Canada's leading literary journalists asks the question: Do we want a public broadcaster? In Saving the CBC: Balancing Profit and Public Service (Linda Leith Publishing, 2013) Wade Rowland points to years of chronic underfunding and the potential loss of broadcast rights for Hockey Night in Canada as signals that it's time for reform. Rowland argues that not since the Great Depression has there been such opportunity for public service broadcasting in Canada to compete on the world stage. But, he says, this will require radical change.

We asked Wade Rowland to talk about the CBC of his youth, today's younger audience demographic, and what vision he holds for the CBC of the future.

Julie Wilson: Tell us about your earliest memories of the CBC. How has a national broadcaster kept you connected to your regional roots and national identity?

Wade Rowland: In my childhood homes in Regina and Winnipeg, the CBC was always on the radio. More than any other influence, it shaped my sense of what it means to be Canadian. Listening to network broadcasts gave you the feeling that you were part of a larger, transcontinental audience that shared some essential values. It has always been the role of public broadcasting to foster tha …