Notes From a Children's Librarian: Books About Disguises 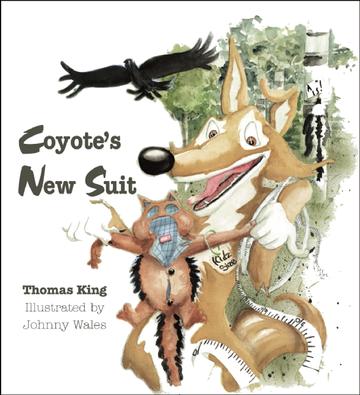 October is the superb month for books about disguise, because of Halloween, of course, and because of how the whole outdoors is dressing up in glorious colour.

Coyote's New Suit, by Thomas King, illustrated by Johnny Wales, reads like an oral tale with Raven as trickster and gullible Coyote as victim. Raven overhears Coyote boasting about his fine suit, and tells him it’s not as nice as Bear's fur, which Bear has taken off to swim. So Coyote steals it. Raven then tells naked Bear where to get new clothes—human attire hung up outside houses, free for the taking. Bear chooses a floral tank top and gold pedal pushers.

Coyote, meanwhile, stumbles around in his too-heavy bear suit at the supermarket and bingo until he gets bored with it. Coyote heads back to the pond, where the plot repeats with other forest animals until Coyote comes home with a chipmunk suit and no more room in his closet. "Why don't you have a yard sale?" Raven says, which leads to a hilarious showdown between animals (in human clothing) and humans (in animal skins). This one could be for K-4, inspiring some trickster tales from the older kids.