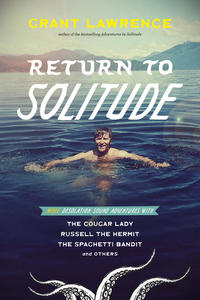 It's been over a decade since renowned broadcaster and indie rock musician Grant Lawrence launched his writing career with the award-winning Adventures in Solitude, yet some things never change—including the winding Sunshine Coast Highway, close calls at the BC Ferries ticket office and carsick children. But this time, Lawrence returns as a husband and father, not as the vomiting and nerdy kid dragged along by his athletic and unflappable parents.

In his inimitable, high-voltage style Lawrence interweaves the rich and harrowing history of the Desolation Sound area with his own experiences of life on the coast.

In this excerpt, he shares the story of what happens when man of many faces Russell Letawsky, meets New Zealand-born Dr. Raymond Bradley adrift in Dank Cove, neither expects the spirited friendship that will spark from the meeting. Once a farm boy turned suit-wearing Toronto yuppie and lately a hermit on BC's remote coast, Russell finds an intellectual equal in the cosmopolitan professor. Notwithstanding their animated philosophical conversations, nothing can quite compare to the raw, untamed wilderness surrounding them.

The locals called it Dank Cove because it received barely a ray of sunshine in summer and absolutely none in winter. On one particularl …