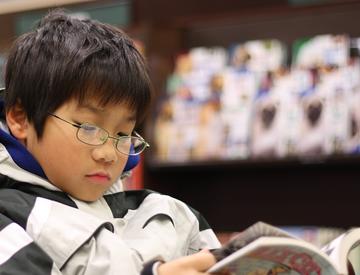 This year for Family Literacy Day, we're turning things over to an expert. Nathalie Foy, of the 4 Mothers Blog, knows books and she knows boys, and her life is rich with both of them. In this list, she recommends great reads for boys of a wide range of ages. And even better: there's no reason a boy's sister won't love these books too. Which is perfect when the very point is families reading together.

One of my greatest joys as a parent is to see my boys with their noses deep into a book or to hear them plead for time to read just one more chapter, one more page, one more word. We are a family of bibliophiles, and I cultivate the love of books in every way that I can. I do not take it as a foregone conclusion that boys would almost always rather do anything but read, or that books are made for boys or girls, or that boys only want to read about boys, or that you have to bribe a boy to sit down with a book, or that you have to settle for less in the literary quality department if you want to match a boy to a book. I refuse to read aloud a book that I will not enjoy myself, and I will not buy books that do not have lasting value. What the boys borrow from the library is entirely up to them, as is what they read in class at school. Between us, we manage to cove …

Roy MacGregor on the Kids' Hockey Series The Screech Owls 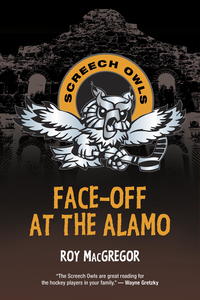 In 1992 I became a sportswriter by accident. I had been on Parliament Hill for 14 years and was in a small dispute with my editor at the Ottawa Citizen over parking. We who worked on the Hill thought the paper should pay for parking if, as the paper had stated, it no longer wished us to avail ourselves of the free media parking at the bottom of the Hill by the river.

The editor, Jim Travers, took me to lunch and told me he had solved my problem: “From now on you’ll be parking at the Civic Centre—we want you to cover the Ottawa Senators.”

But if that was happenstance, it was nothing compared to how I became a children’s author.

I had never written for children, did not read children’s books— had not read many as a child, even, as I much preferred comic books. But Doug Gibson, then publisher of McClelland & Stewart, wanted to talk to me. M&S had heard from librarians and teachers that the reasons boys did not read much was because there were few books out there on subjects that fascinated active boys. He wanted me to consider writing hockey books for kids. There hadn’t been a hockey series, he said, since Scott Young’s books some two generations back.

I thought about it. Why not try it? Trouble is, I thought in today’s hyper-active world, hockey alo …