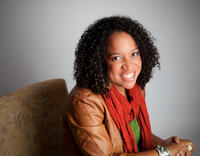 It's back to school this month, so on this week’s Chat, we’re talking children’s literature. I’m pleased to be in conversation with Jael Ealey Richardson, who co-wrote The Stone Thrower with illustrator Matt James. The book recounts the story of her father, renowned CFL quarterback Chuck Ealey, and the meteoric rise of his football career against a backdrop of racism and inequity.

CanLit for Little Canadians called The Stone Thrower “a story of grit, visual and inspirational, in its truest form while Quill & Quire said the book is " ... an inspirational true-life tale that will resonate with dreamers big and small."

THE CHAT WITH JAEL EALEY RICHARDSON 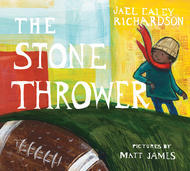 My father, Chuck Ealey, grew up in a poor, segregated neighbourhood in a small town in southern Ohio during one of the most turbulent eras in modern American history. He was a high school student at the peak of the civil rights movement—a college student during the Vietnam controversy. But when I was younger, he rarely talked about his story.

My father said he didn’t remember very much about his childhood, or about the events that would lead him not to the National Football League to play professional football in the country where he was born, but to the Canadian Football League where he started out in Hamilton. I have always found that hard to believe, that he didn’t remember—mostly because during that time of American discord, political upheaval, and personal tragedy, my father managed an unprecedented winning streak on the football field. He never lost a game.

What my father did remember about those times, and what he told me when I asked him how he won all of those games, was that he saw the wins before they happened. He had heard that advice from another athlete he admired and he never forgot it.

“By the time the game happened, I had played the game several times in my mind already,” my father told me.

Whether he was playing at Municipal Stadium in P …