The Recommend for July 2019

This week we're pleased to present the picks of Arthur Slade (Amber Fang), Heather Smith (The Phone Booth in Mr. Hirota's Garden), Jules Torti (Free to a Good Home: With Room for Improvement), Marie-Renée Lavoie (Autopsy of a Boring Wife), and Jennifer Robson (The Gown).

Arthur Slade recommends The Absence of Sparrows, by Kurt Kirchmeier

There is something both stark and beautiful about The Absence of Sparrows by Kurt Kirchmeier. It is stark because the storyline doesn’t pull any punches, but beautiful in its depiction of the relationship between two brothers and the rest of the family in a time of extreme danger and hardship. The main idea of the story is that storm clouds have appeared on earth and they create glass storms—storms that turn individuals to glass. This “unbelievable” idea is presented with Hitchcockian clockwork precision. There is never a moment where you don’t believe the fabulist nature of the story. The novel depicts with clarity how a …

Rhonda Mullins is a translator whose work has been shortlisted for previous Governor General’s Awards, including her translations of Élise Turcotte’s Guyana (2014), Hervé Fischer’s The Decline of the Hollywood Empire (2007), and Saucier’s And the Birds Rained Down (2013), which was also a CBC Canada Reads selection in 2015. Rhonda Mullins studied and has taught translation at McGill University in Montréal, where she currently lives.

THE CHAT WITH RHONDA MULLINS 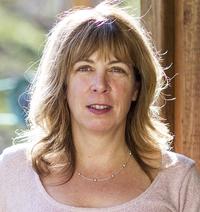 You’ve been a previous finalist for the Governor General’s Award. What was your first reaction to finding out you’d w …