We all have our favourite food scenes from books and movies. Mia Wallace and Vincent Vega bonding over a $5 milkshake in Pulp Fiction. The poor lobsters in Annie Hall. Lady and the Tramp’s romantic spaghetti and meatball dinner. Butter beer and Cornish pasties in Harry Potter. Loretta telling Ronny how he’ll eat his steak in Moonstruck. Every single meal in Louise Penny's mysteries. Key lime pie and potatoes in Nora Ephron's Heartburn. The list is endless and adding to it is completely addictive. You could lose yourself for hours just by clicking on this link.

The best food writing defines characters and crystallizes their challenges and desires, allowing readers and viewers into a fictional world that is both familiar and surprising. When we “read food,” we automatically put ourselves into the scene and imagine how we would feel. Loved. Hated. Shocked. Enraptured. Pretty much any emotion can be summoned through food—and immediately, in very few words—if the writing is brilliant enough.

Food plays a key role in Trevor Cole’s Hope Makes Love. In the novel, the female protagonist, Hope, has suffered a terrible trauma. She is functional, but just, and fearful of intimacy. She meets a man named Adnan, and he is gentle. So as not to give too much away, here’s an excerpt from the book. The context: an email from Hope to Adnan, recalling a night they spent together. 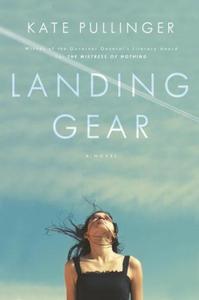 Based on a newspaper article Kate Pullinger first read more than a decade ago, when the body of an airplane stowaway landed in a southwest London supermarket car park, her new novel, Landing Gear, explores what would happen if the stowaway survived unscathed. From the ash cloud airspace shutdown in 2010, through 2012, and onto 2014, the novel is about the complex texture of modern life—airplanes, the Internet, migrant labour, and the loneliness of the nuclear family.

Pullinger's previous books include The Mistress of Nothing, which won the Governor General's Award for Fiction.

She answered our questions about the relationship between literature and the digital world, how immersion in online life changes our stories, and how much of her new novel, with its elements of the fantastic, was so unfathomable after all.

49th Shelf: Parts of Landing Gear were previously published digitally in a series called Flight Paths, the text presented with music and film. And now here is the book in its traditional format, which gives the impression that you think print and digital are complementary (and this is refreshing in a climate that insists on presenting these ideas as necessarily antagonistic).

From Flight Paths, it’s quite clear what digital fiction allows for that …