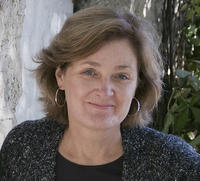 Joan Thomas has won this year’s Governor General’s Award for Fiction for her novel Five Wives.

According to the jury, “In Five Wives, Thomas delivers a compelling and powerful story about an encounter that alters the lives of those involved for generations. Set in a world where Indigenous peoples, missionaries, and the forces of global capitalism collide, Thomas’s tale provides a nuanced examination of Operation Auca—a historical event that took place in Ecuador in 1956. This book raises important questions about religious fervour, autonomy and legacies of violence. Ambitiously conceived and beautifully written, this book is a masterful achievement.”

Joan Thomas is the author of four novels: Five Wives, The Opening Sky, Curiosity, and Reading by Lightning. Her work has won the Amazon First Novel Award, a Commonwealth Writers’ Prize and the McNally Robinson Prize. Additionally, it has been nominated for the Giller Prize, the International IMPAC Dublin Literary Award and a previous Governor General’s Literary Award. In 2014, Thomas was the recipient of the Writers’ Trust Engel/Findley Prize for a writer in mid-career. She lives in Winnipeg, Manitoba.

THE CHAT WITH JOAN THOMAS