Reading England in Through Historical Fiction 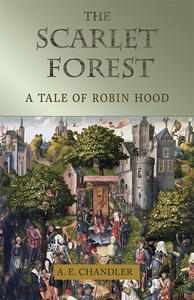 In The Scarlet Forest: A Tale of Robin Hood, A.E. Chandler reimagines the story of Robin Hood for the twenty-first century reader, and in this fantastic list of historical fiction from England, she recommends great books that vividly bring history to life.

The Eagle and the Raven, by Pauline Gedge

After her husband’s death, Boudicca leads a great rebellion against Claudius and the Roman Empire. As the warrior queen of the Iceni, her power extends throughout what is now Norfolk, and farther. Leading the Celtic Britons, she fights for freedom in a struggle that stretches beyond herself, through three generations.

The Magnificent Century, by Thomas B. Costain

Costain’s The Magnificent Century follows the reign of King Henry III, from 1216 and the clash surrounding the Magna Carta, through years of building and rebellion, until Henr …

Set in mid-century India and England against the backdrop of WWII, Thirst, by Shree Ghatage (Doubleday), tells the story of unexpected love born out of an arranged marriage between Vasanti and Baba and how their worlds fall apart after Baba decides to study abroad in London.

49th Shelf talks with Shree Ghatage about desire—"the lynchpin that separates humans from animals"—and her story of a passionate marriage, arranged then torn apart.

Julie Wilson: Thirst is set in India and London, in the early 40s, against the backdrop of World War II. What drew you to this time period?

Shree Ghatage: Thirst is the second novel in a trilogy that began with Brahma’s Dream. There were two characters in Brahma’s Dream—Vasanti and her husband, Baba—who stayed with me even after I had finished working on the book. So when I began to write the first draft of Thirst, the character of Baba, almost unbidden, came foremost to mind, and I was quickly drawn into developing an account of his life. The fact that my first novel was set against the backdrop of India’s 1940’s independence movement meant that Baba’s story would also play out during that era. As it happens, England in World War II became a prolific setting and time period in which to explore the nuances of memory …