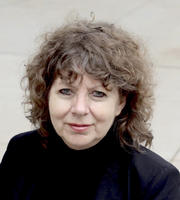 Next up in our special coverage of this year’s Governor General’s Awards is our chat with Colleen Murphy, winner of this year’s GG Award for Drama (English) for her play Pig Girl.

This year’s jury states, “Colleen Murphy weaves a masterfully structured examination of humanity within our most inhumane moments. Pig Girl forces us to relentlessly bear witness to a single night of horror that echoes the silenced ongoing violence against women. Difficult and harrowing, it asks us to acknowledge our collective responsibility. Arresting. Undeniable. Unforgettable.”

Colleen Murphy was born in Rouyn-Noranda, Quebec, and now divides her time between Toronto and Edmonton. Some of her other plays include The December Man (L’homme de décembre), which won the 2007 Governor General’s Literary Award for Drama, the Carol Bolt Award, and the Alberta Theatre Projects Enbridge playRites Award; Armstrong’s War; and The Goodnight Bird. She is also librettist of Oksana G., which gets its world premiere at Tapestry Opera in May 2017, and an award-winning filmmaker whose distinct films have played in festivals around the world.

THE CHAT WITH COLLEEN MURPHY