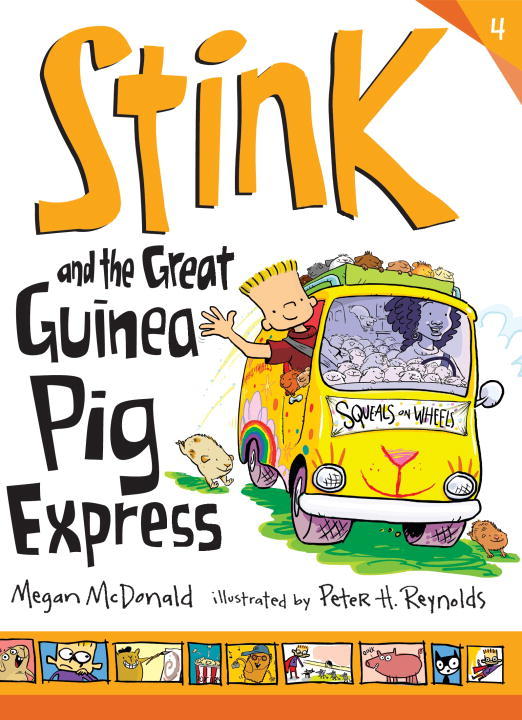 Stink could hardly see as he carried a Leaning Tower of Cereal Boxes up to Webster's front door. "Ding-dong," he called out.

"How many cereal boxes did you collect?" Sophie asked.

"All I brought was Cheerful O's," said Sophie of the Elves. "My dad says they're heart healthy."

"Carrying all these boxes is notheart healthy," said the out-of-breath Stink. "Why couldn't we just use sugar cubes?"

"Stink, we're building the Great Wall of China! Do you know how long it would take to build a wall out of teeny-tiny cubes?"

"Ours is only going to take one day," said Webster.

Just then, Stink's giant stack of cereal boxes crashed to the ground.
"Somebody sure likes Mood Flakes!" said Webster.

"My sister, Judy," said Stink. "They change color when you pour milk on them."

Stink pulled two shiny silver-gray rolls of tape out of his back pockets. "I brought super-sticky duck tape!"

"In our family, we call it goose tape," said Sophie.

Stink and Webster cracked up. The three friends lined up the cereal boxes in the backyard and goose-taped them together. "The Great Wall of Goose Tape!" said Stink. "Did you guys know that you can see the Great Wall from outer space?" He wondered if any aliens or martians would be able to see the Great Wall of Cereal Boxes when it was done.

"Why is it moving?" asked Webster.

"Maybe it's the wind," said Sophie.

All three of them heard the squeaking sound now. Wee, wee, wee,
wee, wee. "There it is again!" said Stink.

"Something's inside the Great Wall!"

"Or a creepy rat," said Webster.

Stink and his friends crawled on hands and knees through the grass. Stink peered into an empty box of Mood Flakes at one end. A furry hair ball with dark brown eyes, a wet pink nose, and twitchy whiskers peered back at him. "All I found is . . . a guinea pig!" said Stink.

"I found one, three!" said Webster.