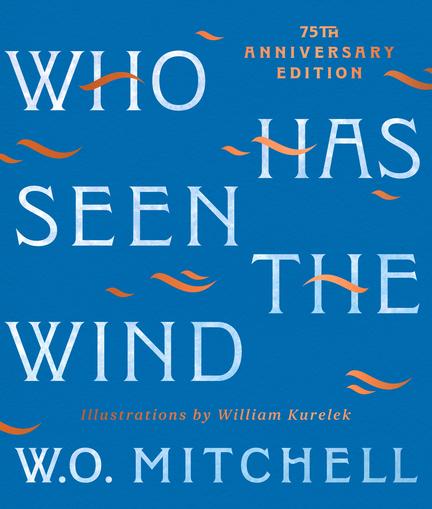 Since its publication in 1947, Who Has Seen the Wind -- a classic tale about a boy growing up on the Saskatchewan prairie -- has been read and loved by millions. With his unique blend of poetry and humour, W.O. Mitchell perfectly captures childhood and small-town life. Featuring an unforgettable cast of characters -- young Brian O'Connal and his family, including his fiery-tongued Uncle Sean and his formidable Scotch grandmother, and the colourful inhabitants of their prairie community -- it is not only the story of one boy, but an ageless story of growing up and the search for meaning.

This new edition commemorates the 75th anniversary of the book's publication, bringing together the complete and unabridged version of the text with 8 full-colour paintings and 32 black-and-white illustrations by renowned artist William Kurelek. It also includes a new foreword from W.O. Mitchell's friend, the acclaimed novelist Frances Itani, as well as new essays about the book's storied history and legacy. Admirers of W.O. Mitchell will cherish this edition, and a new generation of readers will discover this brilliant, timeless novel for the first time.

W.O. Mitchell is one of the most recognized Canadian authors of the last century. He was born in Weyburn, Saskatchewan in 1914, and during a varied career he was everything from a Depression hobo to the fiction editor of Maclean's. His best-loved book, Who Has Seen the Wind (1947) is hailed as the quintessential Canadian coming-of-age novel. Other works include Jake and the Kid (1961), The Kite (1962), The Vanishing Point (1973), How I Spent My Summer Holidays (1981), Since Daisy Creek (1984), Ladybug, Ladybug (1988), According to Jake and the Kid (1989), Roses are Difficult Here (1990), For Ark's Sake (1992), An Evening with W.O. Mitchell (1997) and the play The Black Bonspiel of Willie MacCrimmon (1993). He won the Leacock Medal for Humour for Jake and the Kid and again for According to Jake and the Kid. Mitchell was made an officer in the Order of Canada in 1973 and has been the subject of an NFB documentary entitled W.O. Mitchell: A Novelist in Hiding.

William Kurelek, the oldest of seven children in a Ukrainian immigrant family, was born in 1927 and raised on family farms in northern Alberta and Manitoba. At the time of his death in 1977, he was one of the best-known artists in Canada, and his reputation has continued to grow, with his work featured in galleries across the country and highly sought after for private collections. His distinctive works explore his Depression-era prairie roots and his engagement with spiritual and religious imagery. Kurelek also wrote and illustrated many award-winning books, including A Prairie Boy's Winter and A Prairie Boy's Summer. He was made a member of the Order of Canada in 1976.

"Mitchell . . . has so thoroughly captured the feeling of Canada and the Canadian people that we feel repeated shock of recognition as we read."

"One of the finest Canadian novels ever written."

Other titles by William Kurelek