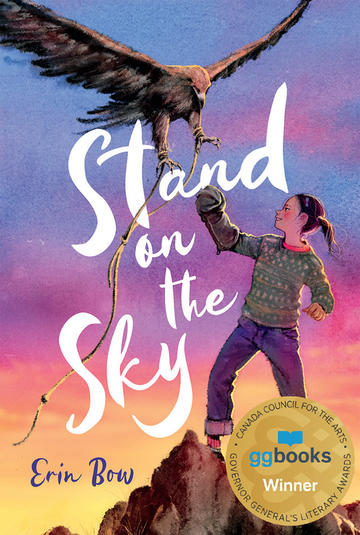 Stand on the Sky

A gripping new read from Erin Bow, acclaimed and bestselling author of Plain Kate and The Scorpion Rules!

Aisulu is a Kazakh nomad girl living in Mongolia. She has always been a bit different - she likes girl things well enough and milks the yaks and fetches water as a daughter should, but she also likes math and a fast ride on her horse, Moon Spot, which she tamed herself.

But when her brother Selik breaks his leg trying to catch an eagle, and is discovered to have osteosarcoma, everything changes! While her parents rush off to the city with her brother, Aisulu moves in with her aunt and her uncle, a former Burkitshi (eagle hunger). Seeing her attachment to a rescued eaglet, her uncle begins training Aisulu to become an eagle hunter herself, even though she is a girl, and girls do not become eagle hunters.

Aisulu is not sure she can do it - but when she finds out that there will be a Festival in town with a prize that could help buy her brother an expensive prosthetic leg, she knows she has to try! The odds are stacked against her, but Aisulu is determined to prove herself and help her family.

ERIN BOW was born in the Midwest and studied particle physics in college, eventually working at the CERN laboratory near Geneva, Switzerland. She then decided to leave science in order to concentrate on her love of writing. Her debut novel, Plain Kate, won the TD Canadian Children’s Literature Award. Erin also received the Governor General's Award for Young People's Literature – Text for Stand on the Sky. She lives in Kitchener, Ontario, with her husband James and their two children. Erin Bow can be visited online at www.erinbow.com.

Erin Bow is a former physicist turned poet and writer of novels for young people. Her first novel, Plain Kate, won the TD Canadian Children's Literature Award and was nominated for the, CLA Book of the Year for Children Award and the Sunburst Award. She has also written Sorrow's Knot and two critically acclaimed science fiction books, The Scorpion Rules and The Swan Riders. She lives in Kitchener, Ontario, with her husband, author James Bow, and their two daughters. Visit her online at www.erinbow.com.

Praise for Stand on the Sky

“Bow's poetic prose heightens the story and deepens it, her rich turns of phrase tucking their own sharp wisdom into the mix.”– The Toronto Star

“A wonderfully open-ended picture book for reading aloud, it's sure to lead children outdoors, or at least to the nearest window.” – Quill & Quire