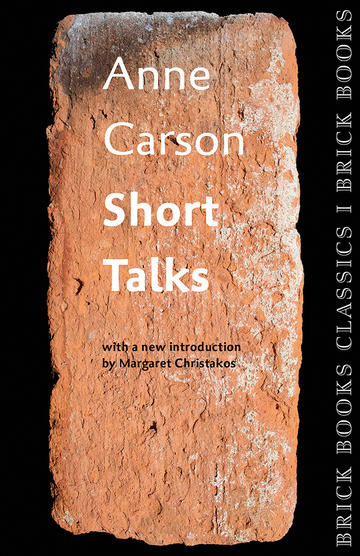 On the occasion of the press's 40th anniversary, Brick Books is proud to present the first of six new editions of classic books from our back catalogue. This new edition of Short Talks features a foreword by the poet Margaret Christakos, a "Short Talk on Afterwords" by Carson herself, and a new cover and design by the renowned typographer Robert Bringhurst.

First issued in 1992, this is Carson's first and only collection of poems published with an independent Canadian press. It announced the arrival of a profound, elegiac and biting new voice. Short Talks can comfortably stand alongside Carson's other bestselling and award-winning works.

The voice is laconic and composed but its images come off these pages resonant (more than resonant, shaking) with their own newness.