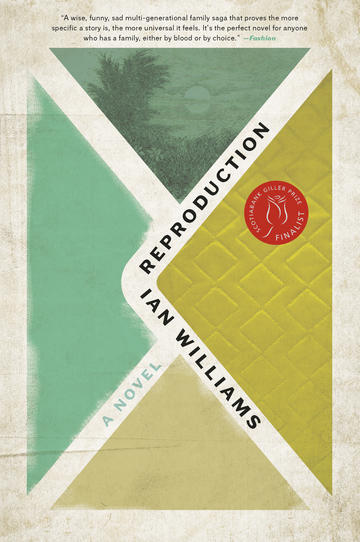 SHORTLISTED FOR THE SCOTIABANK GILLER PRIZE
A hilarious, surprising and poignant love story about the way families are invented, told with the savvy of a Zadie Smith and with an inventiveness all Ian Williams' own, Reproduction bangs lives together in a polyglot suburb of Toronto.

Felicia and Edgar meet as their mothers are dying. Felicia, a teen from an island nation, and Edgar, the lazy heir of a wealthy German family, come together only because their mothers share a hospital room. When Felicia's mother dies and Edgar's "Mutter" does not, Felicia drops out of high school and takes a job as Mutter's caregiver. While Felicia and Edgar don't quite understand each other, and Felicia recognizes that Edgar is selfish, arrogant, and often unkind, they form a bond built on grief (and proximity) that results in the birth of a son Felicia calls Armistice. Or Army, for short.
Some years later, Felicia and Army (now 14) are living in the basement of a home owned by Oliver, a divorced man of Portuguese descent who has two kids--the teenaged Heather and the odd little Hendrix. Along with Felicia and Army, they form an unconventional family, except that Army wants to sleep with Heather, and Oliver wants to kill Army. Then Army's fascination with his absent father--and his absent father's money--begins to grow as odd gifts from Edgar begin to show up. And Felicia feels Edgar's unwelcome shadow looming over them. A brutal assault, a mortal disease, a death, and a birth reshuffle this group of people again to form another version of the family.
Reproduction is a profoundly insightful exploration of the bizarre ways people become bonded that insists that family isn't a matter of blood.

About the Author
Ian Williams is the author of Reproduction, winner of the Giller Prize; Personals, shortlisted for the 2013 Griffin Poetry Prize and the Robert Kroetsch Poetry Book Award; Not Anyone’s Anything, winner of the 2011 Danuta Gleed Literary Award for the best first collection of short fiction in Canada; and You Know Who You Are, a finalist for the ReLit Prize for poetry.
Author profile page >
Excerpt

1.
Both of their mothers were dying in the background.

1.
Both of their mothers were still alive in the background.

In the days before she died, her mother flew into unpredictable rages over the littlest things. Felicia said sardines instead of tuna when passing the tin and her mother blasted her.

Why you working yourself up so? Felicia asked.

Because a tuna is a big fish and a sardines is a small fish. A sardines—you hear the nonsense you have me saying?

Her hands vibrated so badly she couldn’t open the tin, the can, the tin.

At the next meal, Felicia didn’t pour tomato sauce quickly enough into a pot, a sauce pan, thereby essentially, judging from her mother’s reaction, assassinating the Archduke.

All the nutrients done gone already, her mother said. We might as well eat hair. You happy with yourself?

Later that evening, up in the room they rented from a Christian lady, a retired British-trained nurse, who stored her medical equipment in two trunks under the window, Felicia took her mother’s blood pressure. It was 190 over 110.

Two days later it was 205 over 115. Her mother said it was because she had climbed the stairs. Or it was because because because the machine was broken. But when Felicia measured her own pressure, it was 110 over 60, which, instead of confirming the sphygmomanometer’s reliability, caused her mother to worry and divert the conversation to Felicia’s iron levels. She demanded menstruation details, when, how long, how heavy, what colour. Where could she get good beef — West Indian beef, not from these anemic snow-eating cows. The cast iron pot—the soap Felicia used had wrecked it. Nutrients, her mother said that a lot before she turned into a seahorse and drifted off.

And then over the weekend, her pressure went down to 146 over 90. They both laughed.

I telling you I know what I doing. Don’t feel I don’t know.

Her mother had taken to eating two cloves of garlic at each meal.

Sunday night, after the women wrapped their hair for bed, they leaned against the headboard in their rented room in the Christian woman’s house and excoriated the choir director for favouring the tenors. When her mother fell asleep, Felicia read a little Great Expectations for school. Three pages and she was out.

Her mother woke up and took the bus from Brampton to work in Toronto before she died. Obviously. When else would she take it?

Point taken. Yes, and then the office buzzed Felicia during period 4, Home Economics, and told her to bring her things with her, there had been an emergency.

But her mother was not in Emergency at St. Xavier hospital. In fact, Emergency was taped closed. Felicia imagined the worst, that her mother wasn’t simply dead but that a grenade had gone off in her chest and destroyed a section of the hospital. A police officer directed Felicia and a couple with a baby to an alternate entrance.

Felicia found her mother in Palliative, sharing a room with an elderly woman. It was strange to see her mother sleeping in public. She was normally a vigilant woman with chameleon eyes that seemed to move independently from one point of suspicion to another. Now, although they were both closed, she seemed uneasy, perhaps with the fact that her bra had been removed by strangers and her breasts splayed unflatteringly sideways.

Unconscious, he repeated. He presented the woman in the other bed as proof of his medical expertise. My mother. She’s sleeping.

His mother’s mouth was open. There was brown industrial paper towel on her chest to catch the leaking saliva. She gave the impression of needing to be laced up—as if by pulling the strings of a corset one could restore her mouth, her skin, her posture, to their former attentiveness.

She’s not going to make it, Edgar said. He flicked the bag of intravenous solution with his middle finger, then looked for some change to register in his mother. Seconds later, she began coughing. Her cheeks filled with thick liquid as Edgar searched for a cup, her spittoon. Felicia happened to swallow at the same time as his mother and while looking at the lump go down the woman’s throat, she felt the phlegm go down her own. She pulled the collar of her coat tight around her neck.

Felicia turned back to her mother. Her mother was so careful about applying makeup and now there was no trace of it on her. Where were her earrings? Her nail polish looked more crimson than red. Felicia knocked on her knuckles.

She thought she saw her mother frown. She frowned. Or perhaps it was a deception of light, the passing accident of light reflected from someone’s watch face.

Felicia heard the jaunty jingle of keys behind her.

So what brings your mother here on this fine autumn afternoon?

Without moving the rest of her body, Felicia twisted her cervical vertebrae to see if he was serious.

Mutter, here, couldn’t breathe, he offered. It’s her pneumonia. He put an odd stress on the her as if he were settling a dispute between feuding children: it’s her doll, let her have it. They think the cancer might have spread to her other lung. We’re waiting. It’s not easy. The waiting. Not easy at all. Come on, get in there.

Felicia turned around fully. She hadn’t seen snow since arriving in Canada.

Edgar was slouching in one of the chairs in the middle of the room, organizing his keychain. His hair was the colour of the dried oak leaves around her school.

What do you know? she said.

I’m just telling you how it goes. I’ve been through this once, twice, be—

No, I mean what do you know about my situation?

IAN WILLIAMS is the author of Personals, shortlisted for the Griffin Poetry Prize and the Robert Kroetsch Poetry Book Award; Not Anyone's Anything, winner of the Danuta Gleed Literary Award for the best first collection of short fiction in Canada; and You Know Who You Are, a finalist for the ReLit Prize for poetry. He was named as one of ten Canadian writers to watch by CBC. Williams completed his Ph.D. in English at the University of Toronto, mentored by George Elliot Clarke, and is currently an assistant professor of poetry in the Creative Writing program at the University of British Columbia. He was the 2014-2015 Canadian Writer-in-Residence for the University of Calgary's Distinguished Writers Programme. He has held fellowships or residencies from the Banff Center, Vermont Studio Center, Cave Canem, Kimmel Harding Nelson Center for the Arts, and Palazzo Rinaldi in Italy. He was also a scholar at the National Humanities Center Summer Institute for Literary Study and is a judge for the 2018 Griffin prize. His writing has appeared in several North American journals and anthologies.

“Reproduction is many things at once. It's an engrossing story of disparate people brought together and also a masterful unfolding of unexpected connections and collisions between and across lives otherwise separated by race, class, gender and geography. It's a pointed and often playful plotting out of individual and shared stories in the close spaces of hospital rooms, garages, mansions and apartments, and a symphonic performance of resonant and dissonant voices, those of persons wanting to impress, persuade, deny, or beguile others, and always trying again.” —Scotiabank Giller Prize jury citation

“Poet Ian Williams experiments with structure to tell a classic love story. . . . Reproduction is reminiscent of Miriam Toews’s novel All My Puny Sorrows in its balance between grief and humour. It’s an intergenerational story told in an unexpected way.” —Quill & Quire

“Ian Williams delivers a promising first novel. Reproduction manages to be witty, playful, and disarmingly offbeat—even as it hums with serious themes. . . . Reproduction serves as a literary representation of the various intersections of culture, race, and gender in contemporary Canada, it is a mirror with graffiti/social commentary both humourous and powerful scrawled all over it.” —Rayyan Al-Shawaf, Toronto Star

“[D]riven as much by its relationships as its characters, and is intensified and enriched by an inventive style that borrows from Williams’s giant poet’s brain.” —The Globe and Mail

“[A]n intergenerational novel . . . that examines how love can supersede blood ties. [Reproduction’s] complicated path mirrors how many families are built on experiences that don’t make the photo albums, and illuminates how dark and painful moments can share equal space with joy and laughter. . . .With Reproduction, Williams joins authors like David Chariandy and Catherine Hernandez—whose recent novels are set in Scarborough—showcasing the bounty of stories of those who live beyond the CN Tower’s shadow.” —Sue Carter, Toronto Star

“The startling brilliance of Ian Williams stems from his restlessness with form. His ceaseless creativity susses out the right patterning of story, the right vernacular nuance, the right diagram and deftly dropped reference—all in service of vividly illuminating the intermingled comedy and trauma of family.” —David Chariandy, author of Brother and I’ve Been Meaning to Tell You

“Reproduction’s genius is its weaponized empathy, the precision-etched intensity of Williams’s gritty, witty, wholly unsentimental exploration of the collision of human hearts and the messy aftermath. Love and its lack form a spectrum that the characters bounce between, searching for connections, redemption and meaning.” —Eden Robinson, author of Trickster Drift and Son of a Trickster