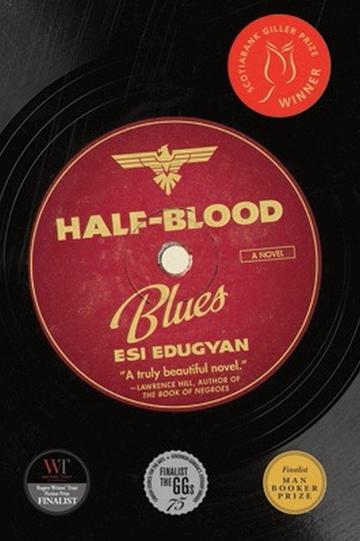 Berlin, 1939. The Hot-Time Swingers, a popular German American jazz band, have been forbidden to play live because the Nazis have banned their "degenerate" music. After escaping to Paris, where they meet Louis Armstrong, the band's brilliant young trumpet player, Hieronymus Falk, is arrested in a cafe by the Gestapo. It is June 1940. He is never heard from again. He is twenty years old, a German citizen. And he is black.
Berlin, 1992. Falk, now a jazz legend, is the subject of a celebratory documentary. Two of the original Hot-Time Swingers American band members, Sid Griffiths and Chip Jones, are invited to attend the film's premier in Berlin. As they return to the landscape of their past friendships, rivalries, loves, and betrayals, Sid - the only witness to Falk's disappearance who has always refused to speak about what happened - is forced to break his silence.

Sid re-creates the lost world of Berlin's prewar smoky bars, and the salons of Paris, telling his vibrant and suspenseful story in German American slang. Half-Blood Blues is a novel about music and race, love and loyalty, and marks the arrival of an extraordinarily "gifted storyteller" (Toronto Star).

A graduate of Johns Hopkins University and the University of Victoria, Esi Edugyan was raised in Calgary, Alberta. She is also the author of Half-Blood Blues, Dreaming of Elsewhere, and Washington Black, which was shortlisted for the Rogers Writers’ Trust, and Man Booker Prizes, and won the 2018 Scotiabank Giller Prize. She has held fellowships in the US, Scotland, Iceland, Germany, Hungary, Finland, Spain, and Belgium. She lives in Victoria, British Columbia.

Esi Edugyan has a Masters in Writing from Johns Hopkins Writing Seminars. Her work has appeared in several anthologies, including Best New American Voices 2003, ed. Joyce Carol Oates, and Revival: An Anthology of Black Canadian Writing (2006).

Her debut novel, The Second Life of Samuel Tyne, was published internationally. It was nominated for the Hurston/Wright Legacy Award, was a More Book Lust selection, and was chosen by the New York Public Library as one of 2004's Books to Remember.

Edugyan has held fellowships in the US, Scotland, Iceland, Germany, Hungary, Finland, Spain and Belgium. She has taught creative writing at both Johns Hopkins University and the University of Victoria, and has sat on many international panels, including the LesART Literary Festival in Esslingen, Germany, the Budapest Book Fair in Hungary, and Barnard College in New York City.