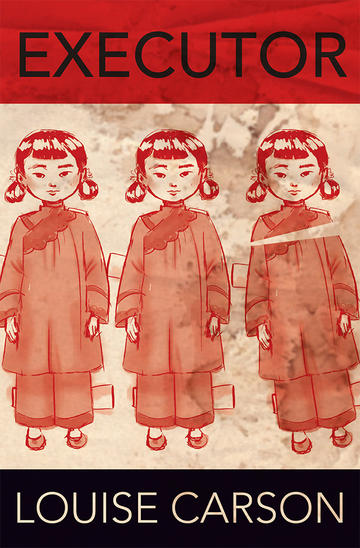 When the poet Eleanor Brandon dies, an apparent suicide, Peter Forrest, her former student, sometime lover and now a married professor, is asked to be her literary executor. He agrees, although he makes it clear that he is only interested in bringing her poetry to publication, not in dealing with the legacy of her social activism on behalf of Chinese dissidents. But after a trip to China, where he and his wife are adopting a third Chinese orphan, Peter finds himself drawn into not only the politics so dear to Eleanor, but a life-threatening plot.

Born in Montreal and raised in Hudson, Quebec, Louise Carson studied music in Montreal and Toronto, played jazz piano, and sang in the chorus of the Canadian Opera Company. Her previous books include the literary mysteries The Cat Among Us and Executor, and the poetry collection A Clearing. Her poems have also been published coast to coast as well as in The Best Canadian Poetry 2013. She’s twice been short-listed in FreeFall Magazine ’s annual contest, and her poem “Plastic bucket” won a Manitoba Magazine Award for Prairie Fire. Louise has read her work in the Montreal area, Ottawa, Toronto, Saskatoon and New York City. She lives in rural Quebec, where she gardens, writes, and teaches music.
Author profile page >
Excerpt

He followed the official down several hallways until they paused outside a door. The young man knocked and entered. The older civil servant behind the desk rose and shook Peter's hand, gesturing for him" to take a seat and brusquely waving the younger man away. Peter noticed the little Canadian flag pin in his left lapel.

The man spoke aggressively. "Mr. Forrest, my name is Macdonald and my job is to make sure Canadians in China have as little trouble with the authorities as possible."

"Am I in trouble?" Peter couldn't help it. His voice stuck and rasped in his throat. Annie looked up at his face.

"No, no. It's more a matter of confirming a report made by a third party about an incident at the orphanage you visited a few days ago in Fujian province. Could you tell us in your own words what happened there?"

So Peter spoke about Chen, the drive to the orphanage, the army-occupied building next door to the orphanage, how nice the orphanage looked, the fire there and their subsequent exit, how the soldiers had come to put out the fire and how he had then been driven back to the airport.

"And those things were all that you saw, all that struck you?" Macdonald looked sharply at Peter as he spoke.

Peter wished he knew whether the man wanted full disclosure for some reason of security or would just as rather he, Peter, kept quiet about seeing the surgeons come up from the orphanage basement. It was Annie who decided him. The most important thing now was to get her back to Canada.

"That's it. For an orphanage, I thought it was situated in a great spot, lots of plants and forest in the background. The children looked happy. The staff were nice people." He looked blandly at Macdonald.

The man held his gaze for a moment then made a note. "Thank you for your time,"' he said, rising and shaking hands again. "Enjoy your trip and safe voyage home."