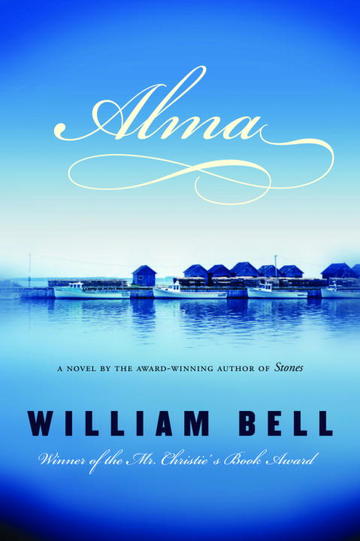 Award-winning YA author William Bell’s Alma is the captivating story of a quiet girl who builds a friendship with a reclusive stranger.

Times have been tough since Alma’s father died and she and her mother had to give up their farm and move into town. Luckily, Alma can always retreat into the books of her favourite author, R.R. Hawkins.

When Alma’s teacher notices her lovely handwriting, she recommends Alma for a job transcribing letters for “Miss Lily,” a reclusive old woman who has just arrived from Boston. Eventually, their mutual love of reading creates a strong friendship. Miss Lily lends Alma some of her favourite books, introduces her to calligraphy, and encourages her passion to write stories.

But who is this difficult and solitary old woman who reminds Alma of Dickens’ Miss Havisham? And why is she so secretive about the part of her life she refuses to share? Could she be, as Alma begins to suspect, R.R. Hawkins herself? Alma is determined to find out.

This touching story explores the relationship between a blossoming writer and her mentor, and delves into the complicated dynamics of friendship and trust.

Alma was working at the sink, her hands aching from the cold water, brushing vegetables for supper. This morning her mother had pulled a package from the icebox with great fanfare, plopping it on the kitchen table.

Alma had unwrapped it. “It’s only meat,” she had complained. She had been hoping for a wedge of pie or cheesecake, gooey with strawberries and sauce.

“It’s lamb. The kitchen had a bit left over last night. We can make Irish stew.”

“I thought you liked Irish stew,” her mother had said.

Now the lamb, trimmed and cut into small pieces, lay on a saucer.

“Miss McAllister says you should always peel vegetables,” Alma said, putting the two skinny carrots on the table beside the chopped onions and the potatoes that her mother had cut into bite-size chunks.

“Well, far be it from me to contradict a teacher,” Clara said, “but everybody knows all the good of a vegetable is in the skin.”

“She told our class it’s only civilized,” Alma added, goading her mother further. Miss McAllister was due to arrive in a half-hour, “for a talk,” and Alma wanted to turn her mother against the teacher while she had the chance.

Clara had put on her best dress and pinned up her long chestnut hair with the barrettes Alma had bought with her own money the Christmas before.

Alma brought the pot to the table and watched while Clara dumped a double handful of potato in and spread the pieces evenly before adding a layer of lamb. Onions came next, then carrots, then salt and pepper. Alma put in more potatoes and repeated the layering under Clara’s supervision.

Clara was adding cold water to the pot when there came a knock on the door. “That’ll be her,” she said. “Let her in, Alma. I’ll find a teacup without a crack in it.”

Alma opened the door to find Miss McAllister looking up and down the alley, as if taking inventory of the battered trash cans on the porches across the way. Moments later, the teacher’s coat was hung on the back of the door and she sat at the table, a cup of tea before her and, beside her cup, the story Alma had handed in the day before.

“I’ll not take up too much of your time, Mrs. Neal,” the teacher began. “I’ve come to speak with you about Alma’s assignment.”

Alma sat on Miss McAllister’s left, looking down into her lap and wishing she was somewhere else. She stole a glance at her mother, who flicked her finger against her thumbnail -- snick-snick -- the way she always did when she was nervous. Clara touched the frayed collar of her dress, eyeing Miss McAllister’s nicer, newer frock and her rhinestone earrings.

“Last Friday,” the teacher went on, “my pupils handed in a story. I’d like to read Alma’s submission to you.”

“ ‘Twice down-off two times, there weren’t two rich scullery maids named Skirt of Grasses.’ ” Miss McAllister glanced at Alma, then at Clara. She continued reading. “ ‘Skirt of Grasses didn’t die in two huge rooms out of the attic of a tiny stone hovel, and two nights she didn’t play from dusk until dawn outside the kitchen, cooking five the Duke and his eight adults.

Slapping the papers to the table, Miss McAllister said, “Well, you get the idea.”

Alma looked at her mother. Clara’s mouth had tightened. Snick-snick. “Alma, what on earth -- “”

“Alma!” her mother repeated. “What do you have to say for yourself?”

Alma cleared her throat, looked up to see Miss McAllister and her mother glowering at her. “Well, I -- ” But her courage failed her.

How could she explain? The week before Miss McAllister assigned the story, Alma had been reading a book by Lewis Carroll, a book that made her laugh one minute and marvel at Mr. Carroll’s cleverness the next. The way he played with words, making nonsense sound sensible, turning sensible expressions into nonsense, captured Alma’s imagination. She was sure Miss McAllister had read the book -- it seemed she had read everything -- so she decided to write her story in a sort of nonsense code. Miss McAllister will love it, she had thought.

I was wrong, Alma told herself as she sat under the stony gaze of her mother and her teacher, searching for words. “I thought it would be fun” was all she managed.

“You thought what would be fun?” Clara demanded. “For heaven’s sake, Alma, talk sense!” Snick-snick.

Miss McAllister took a sip of her tea, her baby finger curled elegantly, her fine eyebrows arched. “Alma,” she said gently. “Try to make yourself clear.”

Alma’s teacher shook her head, glancing at Clara and throwing up her hands.

Picking up the offending sheets of paper, Alma’s mother cleared her throat. “So once upon a time becomes twice down-off two times,” she said slowly. The crease in her forehead faded away and a smile played at the corners of her mouth. “Twoderempty!” she burst out, and began to laugh.

Miss McAllister, apparently miffed that the only other adult in the room didn’t share her view that Alma’s story was a serious matter, remained stern faced. Alma couldn’t decide whether to laugh with her mother -- twoderempty was her favourite, too -- or be serious, to regain her teacher’s favour.

“But what was the point, Alma?” Miss McAllister asked. “Writing a story that no one but you understands seems . . . not useful.”

“I don’t know,” Alma replied. “I thought it would be fun,” she repeated. She had decided not to mention Lewis Carroll.

“Where did you come up with Skirt of Grasses?” Clara asked.

“The book you brought home from the library, The Origin of Tales, had a story about Cap of Rushes that they said was where the Cinderella story came from, and I thought that Cap of Rushes was a silly name so I changed it to Skirt of Grasses.”

“And you wrote the whole thing this way?” Clara asked.

“It must have taken ages.”

“Well,” Miss McAllister murmured. “I hardly know what to say. I suppose I should have caught on.”

Alma stared at her. She had never seen Miss McAllister look flustered before.

The teacher straightened her shoulders, took a deep breath. “At any rate, I’m afraid the story is unacceptable, clever though it may be. It doesn’t follow the guidelines.”

“Maybe you’d allow Alma to write another one,” Clara suggested.

Alma did as her mother told her.

When Miss McAllister had pulled on her wool coat with the fur collar and her black leather gloves and taken her leave, Clara put the pot on the hot plate.

“Now, Alma, I’m off to work. Don’t forget to empty the drain pan in the icebox. And you’ve got to watch this stew constantly. Don’t stir it. Just make sure it doesn’t boil over or burn. I’ll be back in time for supper at seven.”

Clara tapped the lid of the pot. “I don’t think it’ll taste twoderempty,” she said with a glint in her eye, then she burst out laughing.

William Bell is the award-winning author of thirteen books for young people including Zack, which won the Mr. Christie’s Book Award and Stones, which is the CLA YA Book of the Year. Bell lives in Orillia, Ontario, with writer Ting-xing Ye.