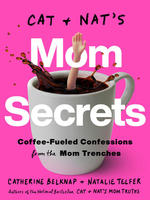 About the book: The bestselling authors of Cat and Nat's Mom Truths go deeper than ever before with outrageous revelations and relatable rants that let every mom know she's not alone.

Remember when you were first expecting, and it seemed like every woman on the planet who had ever given birth felt the need to warn you? Your life is about to change forever!

With seven kids between them, Cat and Nat know a thing or two about the way motherhood turns your life upside down. Fiercely committed to dismantling the pressure to be perfect, they've connected with their audience by sharing their completely real take on the stress, guilt, and joy of being a mom. One might even say they've made a brand of oversharing.

In their first book, they shared short dispatches and advice from the trenches. Now, Cat and Nat have invited the legion of moms who love them to share their own deepest darkest parenting secrets, and use those to kick off their own stories, going deeper and ranting harder about big topics like guilt, balancing career with motherhood, and body image.

Cat dives into the Bachelor-inspired trend of taking your kids on "one-on-one's" and shakes off the guilt when she doesn't have the time/energy/helicopter to pull it off. Nat explains why her husband is completely off base when he "romantically" refers to her as his best friend (obviously, Cat already fills that role!). And Cat and Nat finally share the skincare routine that a lot of you have been asking about (it involves the car mirror and severely delayed deodorant application).

These moments of truth are wildly funny, but also universal and oh-so-relatable. Grab a weighted blanked and curl up with this book for the comfort and camaraderie every mom needs.

My Own Blood: A Memoir, by Ashley Bristowe

About the book: Mothering under normal circumstances takes all you have to give. But what happens when your child is disabled, and sacrificing all you've got and more is the only hope for a decent future? Full of rage and resilience, duty and love, Ashley Bristowe delivers a mother's voice like no other we've heard.

When their second child, Alexander, is diagnosed with a rare genetic disorder, doctors tell Ashley Bristowe and her husband that the boy won't walk, or even talk—that he is profoundly disabled. Stunned and reeling, Ashley researches a disorder so new it's just been named—Kleefstra Syndrome--and she finds little hope and a maze of obstacles. Then she comes across the US-based "Institutes," which have been working to improve the lives of brain-injured children for decades. Recruiting volunteers, organizing therapy, juggling a million tests and appointments, even fundraising as the family falls deep into debt, Ashley devotes years of 24/7 effort to running an impossibly rigorous diet and therapy programme for their son with the hope of saving his life, and her own. The ending is happy: he will never be a "normal" boy, but Alexander talks, he walks, he swims, he plays the piano (badly) and he goes to school.

This victory isn't clean and it's far from pretty; the personal toll on Ashley is devastating. "It takes a village," people say, but too much of their village is uncomfortable with her son's difference, the therapy regimen's demands and the family's bottomless need. The health and provincial services bureaucracy set them a maddening set of hoops to jump through, showing how disabled children and their families languish because of criminally low expectations about what can be done to help.

My Own Blood is an uplifting story, but it never shies away from the devastating impact of a baby that science couldn't predict and medicine couldn't help. It's the story of a woman who lost everything she'd once been—a professional, an optimist, a joker, a capable adult—in sacrifice to her son. An honest account of a woman's life turned upside down.

About the book: The experience of motherhood is monumental, yet rarely discussed in connection with literary or creative life. How do we navigate the twin devotions of love and art? How does motherhood disrupt the creative process? How does it enhance it?

Good Mom on Paper is a collection of twenty essays that goes beyond the clichés to explore the fraught, beautiful, and complicated relationship between motherhood and creativity. These texts disclose the often-invisible challenges of a literary life with little ones: the manuscript written with a baby sleeping in a carrier, missing a book launch for a bedtime, crafting a promotional tour around child care. But they also celebrate the systems that nurture writers who are mothers; the successes; the intricate, interconnected joys of these roles.

Honest and intimate, critical and hopeful, this collection offers solace and joy to creative mothers and asks how we can better support their work. Mothers have long been telling each other these vital stories in private. Good Mom on Paper makes them available to everyone who needs them.

A Womb in the Shape of a Heart: My Story of Miscarriage and Motherhood, by Joanne Gallant

About the book: An intimate memoir of miscarriage, premature birth, and motherhood from a bold and brilliant new voice in Atlantic Canada

I am the space between motherhood and longing for it, but it’s a space that doesn’t exist. I can’t be both fertile and infertile, our language doesn’t allow for it. So, this is the space I have created for myself. This is where I live. Forever fertile and infertile. A mother to six, a mother of one. I am childless, and with child. Barren and fruitful. Pregnant and then not. Lucky, unlucky.

A thirty-year-old pediatric nurse with dreams of motherhood, Joanne Gallant was confident that she and her partner would conceive soon after they married—it was a matter of when, not if. And yet. Her first pregnancy, a set of twins, is riddled with dangerous complications that endanger her life, and results in devastating loss. After emergency surgery, Gallant is diagnosed with a bicornuate uterus, a rare condition also known as a heart-shaped womb. There is no cure, no pill, no surgery that can alter her fate. What is happening to her now was preordained long before her own birth.

As motherhood continues to elude her, Gallant and her partner navigate the world of infertility—up until the pregnancy that results, to their astonishment, in the premature birth of their son. What follows are not the blissful, pastel days of early motherhood, but months of severe post-partum anxiety and post-tramatic stress; she is sure her son will be taken from her. It is a matter of when, not if. Punctuated by moments of incredible joy as she raises her young son, A Womb in the Shape of a Heart is the intimate story of Gallant’s journey through miscarriage and motherhood, holding space for the complicated paradoxes of grief and gratitude, of life and death, and the impenetrable depths of a mother’s love.

Secret Life of a Mother, by Hannah Moscovitch

About the book: The raw and untold secrets of pregnancy, miscarriage, childbirth, and mothering are revealed in this true story of motherhood for the twenty-first century.

A playwright writes an exposé of modern motherhood full of her own darkly funny confessions and taboo-breaking truths. One of her real-life friends, an actress, performs the piece, and through it her own experiences of motherhood start to surface. These mothers are not the butts of jokes, the villains, or the perfect angels of a household.

This empowered and relatable play was written collaboratively between award-winning theatre artists Hannah Moscovitch, Maev Beaty, and Ann-Marie Kerr, with co-creator Marinda de Beer. Uplifting and full of love, Secret Life of a Mother is a generous and powerful act of truth-telling for anyone who has thought about, been, loved, known—or come from—a mother.

Send Me Into the Woods Alone: Essays on Motherhood, by Erin Pepler

About the book: Dispatches from modern motherhood by a reluctant suburbanite

Send Me Into The Woods Alone is an honest, heartfelt, and often hilarious collection of essays on the joys, struggles, and complexities of motherhood.

These essays touch on the major milestones of raising children, from giving birth (and having approximately a million hands in your vagina) and taking your beautiful newborn home (and feeling like you’ve stolen your baby from the hospital), to lying to kids about the Tooth Fairy and mastering the subtle art of beating children at board games. Plus the pitfalls of online culture and the #winemom phenomenon, and the unattainable expectations placed on mothers today.

Written from the perspective of an always tired, often anxious, and reluctant suburbanite who is doing her damn best, these essays articulate one woman’s experience in order to help mothers of all kinds process the wildly variable, deeply different ways in which being a mom changes our lives.

About the book: When Tarah Schwartz miscarried for the first time at almost 5 months, she assumed this would be just a blip on the way to motherhood. But more miscarriages would follow, threatening her stability, her relationships, and changing her profoundly. In this memoir, Tarah puts words to excruciating loss as she recounts her unexpected and deeply inspiring journey to motherhood. As a longtime news reporter, she spent years working in front of a television camera, telling stories that reflected the power of the human spirit to survive. This time she tells her own.

About the book: (M)othering is a universally understood phenomenon that speaks to the act of becoming something unexpected and entirely outside ourselves. And this book is a collection of writing and art about that. 56 contributors illuminate the kind of gritty, body mind soul transformations that only the mothering myth can evoke. Their work will take you to wonder and wildness, kindness, beauty, grief, love.

These writers and artists show us what it means to create, to birth something, to love it, and to suffer loss. They share their truths about being persecuted, fleeing. About trans-generational trauma. Some write of broken women, mothering their mothers and sisters, choosing not to be mothers. Having many mothers. Mothering grown children. Men who want to be mothered. They tackle identity, adoption, abortion, addiction, self-care, sacrifice, nature and nurture, making art, unravelling, invention, loneliness, anger, laughter, and joy. They are queer, Metis, indigenous, French, male, Jewish, Mennonite, descendants of the Blackfoot and the Cree, settlers and immigrants. In unison, they speak about experiences far beyond the pathologizing of the pregnant female body.

About the book: Grow up, get a job, find a partner, have a family, live the dream. This was always the plan...with some deviations along the way. Using sarcasm and vulnerability, Morwenna speaks about growing up, finding love, and then struggling when the rest of the plan isnt meant to be. This is the raw & real story of one couples rollercoaster ride as they discover infertility, try various treatments, suffer an adoption reversal, and learn to make new plans and find the funny moments. A raw, sarcastic, and sometimes funny account of the struggles of growing up, dealing with infertility, fertility treatments, and the adoption process.