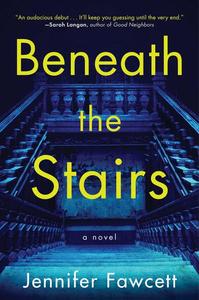 "Are you always on the lookout for a rich, mystery-riddled haunted house novel for grown-ups? Me too. Jennifer Fawcett's Beneath the Stairs is that book. A thrilling, thoughtful, character-driven crucible that reveals the ways childhood fear clings to us, shapes us, but can also show the one way out of our adult darkness." —Andrew Pyper, author of The Residence and The Demonologist

As I was preparing this list, I went back to my parent’s house in Eastern Ontario and found myself digging through the old books in my childhood bedroom. The more I thought about what should be on it, the more I found myself returning to old favourites. I’ve always read widely, a habit I understand the value of now that I am also a writer. This list contains short and long fiction, poetry, a play, and several works that defy category. Each of these writers left an imprint on me because they helped expand my understanding of what stories could do.

Let me start with Peggy Dymond Leavey, or, as I refer to her, Aunt Peggy. I come from a family of readers. When I was a teenager—right about when I was starting to take my writing seriously— she published the first of what would become thirteen books, and I suddenly had a writer in the family. (In reality, it wasn’t sudden; she had been publishing articles, poems, and short stories for years, but I was a child and not aware of such things.) I asked how she did it; she left the notepad where she was writing the book open on the kitchen table, so it was always pulling her back to finish it. My Aunt Peggy showed me that it is possible to realize a long-held dream, and that’s why she is starting this list.

The Stubborn Particulars of Grace, by Bronwen Wallace

The date I wrote on the inside of my copy of this book confirms that I was 16 when I found Bronwen Wallace. She had died a few years before, a loss I felt as soon as I fell in love with her poetry. She made the ordinary into a kind of magic, and I, a teenager hungry for adventure and a bigger world than I had access to, found myself looking at the familiar landscapes of my life with new eyes. Before I could define even feminism, Bronwen Wallace showed me a new kind of resilience and, yes, grace.

I first experienced George Elliott Clark’s poetry in his own voice as I listened, transfixed, while he read to us. My English teacher had invited him to our school to read from his new book, Whylah Falls. As he spoke, his body moved in rhythm. It was a lesson in the musicality and muscularity of language, taught by a soon-to-be giant of Canadian literature in a high school library. Novel, poem, monologue—this book is hard to define. For that reason, it was also one of the first to teach me how fluid form can be.

Fall On Your Knees, by Ann-Marie MacDonald

Fall On Your Knees will be back in the news again soon because the play adaptation of it, written by Hannah Moscovitch and directed by Alisa Palmer, is going to tour Canadian theatres in 2023. But before then, if you haven’t yet had the joy of immersing yourself in this multi-generational family saga set in Cape Breton, grab a copy of the book, lock the door so you can’t be disturbed, and dive in. I’ve gone on to savour many of Lisa Moore’s books and am eagerly awaiting her newest release, This Is How We Love, but her 2002 short story collection, Open, was my introduction to the lushness of her prose. Sensual, in its truest meaning as the gratification of the senses, is the best way to describe the experience of reading her work. Perhaps this is as close I will come to synesthesia.

I will confess, I have not seen Wajdi Mouawad’s 2005 play Scorched (translated into English by Linda Gaboriau) on stage; I have only experienced it on the page. I am a playwright, so it stands to reason that I have read a lot of plays, but I wanted to include this exceptional and heart-wrenching story on this list because reading it impacted all of my writing. His introductory note about making the play is titled “A Ruthless Consolation,” and that is the best way to describe this story. It is both about the power of love and the power of hate. Reading allows us to witness experiences that are terrifying. There is a necessary release—catharsis—in that journey.

How to Pronounce Knife, by Souvankham Thammavongsa

In the first months of the pandemic, I was introduced to Souvankham Thammavongsa’s debut collection of short stories, How to Pronounce Knife, when time was a blur because I was still getting used to never leaving home. These stories were an escape into lives so very different from my own and yet so recognizable for their aching humanity. However, the precision of her language and the seeming simplicity of her plots allow something much more profound to breathe beneath.

I am late to the party that is Sheila Heti’s writing but am trying to catch up. It feels appropriate to end a list that includes multiple forms with a book from a writer who experiments in form. The structure of this book was new to me, but the question at its core—whether or not to become a mother and what that decision, in either direction, would mean—is achingly familiar. There is an intellectual pleasure in reading this and watching each question unfold into more questions, but the emotional resonance is what will stay with me.

Learn more about Beneath the Stairs:

In this spine-tingling, atmospheric debut for fans of Jennifer McMahon, Simone St. James, and Chris Bohjalian, a woman returns to her hometown after her childhood friend attempts suicide at a local haunted house—the same place where a traumatic incident shattered their lives twenty years ago.

Few in sleepy Sumner’s Mills have stumbled across the Octagon House hidden deep in the woods. Even fewer are brave enough to trespass. A man had killed his wife and two young daughters there, a shocking, gruesome crime that the sleepy upstate New York town tried to bury. One summer night, an emboldened fourteen-year-old Clare and her best friend, Abby, ventured into the Octagon House. Clare came out, but a piece of Abby never did.

Twenty years later, an adult Clare receives word that Abby has attempted suicide at the Octagon House and now lies in a coma. With little to lose and still grieving after a personal tragedy, Clare returns to her roots to uncover the darkness responsible for Abby’s accident.
An eerie page-turner, Beneath the Stairs is about the trauma that follows us from childhood to adulthood and returning to the beginning to reach the end.