This week we're pleased to present the picks of writers Ian Colford (A Dark House and Other Stories), Ariela Freedman (A Joy to Be Hidden), Farah Heron (The Chai Factor), Sky Curtis (Traps), Heidi L.M. Jacobs (Molly of the Mall), and Denis Coupal (Blindshot).

Dazzle Patterns is a quietly seductive novel, set at the time of the Halifax Explosion, which took place on the morning of December 6, 1917. Clare Holmes, a young woman employed in the glassworks, is injured when a window is blown apart by the blast. Fred Baker, a co-worker, takes Clare to the hospital. Clare, alone in the city, longs for her fiancé, Leo, who is fighting in France. But as the war drags on, Clare and Fred frequently find themselves in each other’s company and are taken by surprise when a trusting intimacy springs up between them. Alison Watt, a professional artist, brings her interest in the visual experience to her debut novel. The writing is filled with stirring moments of great beauty, particularly regarding the interplay of light and dark and the effect of the natural world on her characters’ moods and emotions. This is a book that draws us irresistibly into a world where people’s lives have been shattered by circumstances beyond their control.

Ian Colford's most recent collection is A Dark House and Other Stories. His short fiction has appeared in Event, Grain, Riddle Fence, The Antigonish Review and other literary publications. His work has been shortlisted for the Thomas H. Raddall Atlantic Fiction Award, the ReLit Award, the Journey Prize, and the Danuta Gleed Literary Award. Ian lives in Halifax.

I have plenty of company in my love for Alice Munro. It isn't so much any single collection as the entire body of work, or body of wisdom: I think of Proust's notion that we look into books to know ourselves. For as long as I can remember, Munro has given me the words I need for the experiences I never before realized I had to name. I'll take any Munro, but I have a special fondness for Runaway, and particularly the trio of stories featuring the character named Juliet, which follows her from youth to middle age, from early passion to motherhood, to a mature and ambivalent solitude. That last line of the story titled "Silence" breaks my heart every single time.

Ariela Freedman teaches literature at Concordia’s Liberal Arts College in Montreal, where she lives with her family. Her first novel, Arabic for Beginners, was shortlisted for the QWF Concordia University First Book Prize and is the winner of the 2018 J. I. Segal Prize for Fiction. A Joy to be Hidden is her second novel.

Maureen Jennings, the award-winning author of the Murdoch Mysteries, has written another compelling series: the Detective Inspector Tom Tyler Mystery Series. The first book in the series, Season of Darkness, is set in a Shropshire village in 1940 during the Second World War. Unlike other novels that take place in fraught political times, Season of Darkness is not mired in heavy-handed historical facts that overwhelm the plot. It is a captivating read with a strong plot and realistic characters who engage the reader from beginning to end.

This book deftly navigates the human consequences of wartime while Tyler does his best in adverse circumstances to solve several interlinked murders that begin with the death of a lovely female wartime volunteer. Throughout the book there is a sympathetic and fair-minded perspective of the Germans who are held in local internment camps simply because they did not have the correct papers at the onset of the war. This portrayal of the mostly innocent inhabitants is balanced with the constant threat of German invasion into England.

Maureen Jennings has created an endearing character in DI Tom Tyler, the village’s sole investigator. He has a charming vulnerability, a strong moral compass, and a passion for justice. He deftly handles his leadership role while being torn between his duty to catch the murderer and his friendships with the local population.

This is a beautifully written book that carries the reader along to an unpredictable conclusion. Highly recommended.

Sky Curtis is the author of over a dozen books including those in her Robin MacFarland Mystery Series. The latest in the series is Traps. She divides her time between downtown Toronto, Nova Scotia, and Northern Ontario.

When people tell me that they don’t normally read romance or rom-coms, and ask me where to start, I usually scream JENNY HOLIDAY! Jenny is just so witty, and her books are smart, relatable, hilarious, emotional, and so, so, steamy! Her character-driven stories are perfect escapist reading, while still being so satisfying and thought-provoking. In the first in her Bridesmaid Behaving Badly series, One and Only, young adult author Jane is a bridesmaid to her bridezilla best friend, and is tasked with "babysitting" the groom’s trouble-prone brother who's just out of the army. But Cameron turns out not to actually be trouble, just misunderstood.

Cameron and Jane visit so many familiar Toronto-area attractions like Canada’s Wonderland, Niagara Falls, and Prince Edward County, all while the unlikely couple discover more about each other, and themselves in the process. I cannot resist gruff and rough romantic heroes who turn out to be feminist softies on the inside. Cameron’s genuine annoyance at the patriarchy when Jane complains about needing to lose weight to fit into the bridesmaid dress warmed my heart. And Jane, awkwardly nerdy, and so loyal to her friends, is so endearing. Plus, this book includes Zena cosplay. What more could you want?

Farah Heron is the author of The Chai Factor. Her career has ranged from selling yarn to selling bikinis, and from hiring in the high-end fashion industry to counselling high-risk youth. She lives in Toronto. 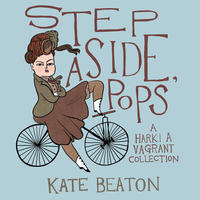 In recent weeks, I’ve been reading a lot of wonderful, difficult, and emotionally challenging books. While I’m glad I read them, I’ve found myself wanting something completely different. I found it in Kate Beaton’s utterly delightful collection of comics, Step Aside, Pops, a follow-up to her equally wonderful Hark! A Vagrant.

Kate Beaton has a smart and adorably irreverent approach to history. This book makes me wish she’d been in my undergraduate classes, passing me drawings of Julius Caesar being gleefully mobbed by a pack of drooly, dorky “Dogs of War” or Mr. Darcy exclaiming, “Damn! It’s those horrible Wuthering Heights characters,” as Heathcliff and Catherine crash his and Elizabeth’s “most beautiful picnic.”

Trying to describe what’s so wickedly delightful and unabashedly nerdy about Beaton’s work without seeing her drawings will, I know, fail miserably, so you should just get this book right away. But in the meantime, here are a few of my favourite moments. When Alexander Pope hears himself misquoted at a party and corrects them, a woman behind him says, “It’s like, that kind of pedantic nerd is the worst.” Or, in the “Founding Fathers Stuck in an Amusement Park” series, a Founding Father stands outside the “Spooky Tunnel” and says, “What’s in there? Tea Taxes?” Or, the fact that the Lady of Shalott has that hanging kitten poster in her tower, only hers reads, “Hang in there. Who knows what the curse may be.” Perhaps my favourite part is when Beaton writes, “’Why do you make such esoteric history jokes?’ they ask. ‘Why don’t you make comics about things people know about, like the man who was in the first three seconds of a decades-old Janet Jackson music video? That’s what the people want.” She then offers a ten-page comic about the life story of the “Nasty boy.”

Maybe it’s a good thing Kate Beaton wasn’t sitting next to me in history and literature classes. I’m sure I would have been asked to take my uncontrollable giggling out of the lecture hall on numerous occasions.

Heidi L.M. Jacobs was born and raised in Edmonton. While attending the University of Alberta, she worked a variety of retail jobs, including selling shoes. She is currently the English and History Librarian at the University of Windsor. Molly of the Mall is her first novel.

James King sums it up in The Life of Margaret Laurence:

“As autobiographical fiction, The Diviners is an extremely revealing work because it plunges its reader into Morag’s – and Margaret’s – inner world. It is also a novel that continually challenges the reader because it goes as far as it can in exploring the dark recesses of the protagonist’s sensibility.”

The Diviners is a messy, over-long, complicated, failed masterwork by one of Canada greatest writers. It is also one of the most truthful, visceral descriptions of the writer’s life, the artist’s life. For anyone writing, or shouldering creative ambition, trying to fit the making of their oeuvre between the mundane tasks and systemic pressures that life imposes, The Diviners enlightens by its exposition of both the burden and exaltation of artistic will.

Laurence’s Morag learns to enjoy the solitude in which the noble fight to make great art takes place, and does so with realistic depth, understanding and unflinching bravura. The book meanders in content and structure, but so does the river of life that Laurence dared to attempt to depict, snaking unevenly in her Canadian characters’ lives. Somewhere along that broken, disordered path, Laurence shows us, as she had herself learned in her own novelist’s life, how a woman, or anyone, bent on productivity and achievement, might approach that daunting, holy fight with humility and love for family and oneself.

Laurence closes the book with her main character, Morag, walking out from her home to look at the river, strong enough to “look ahead into the past, and back into the future, until the silence.” The book’s humanity haunts me to this day.

Denis Coupal is a Montreal writer, actor, multi-disciplinary artist and business strategist. He won Honourable Mention in the 2011 Quebec Writing Competition for his short story “Brand Loyalty,” which was then published in Minority Reports. Blindshot is his first novel.