Authors have always been expected to self-promote to some degree, but occasionally an author — or, in this case, two authors — comes along who seems almost born for the task at hand.

Vivek Shraya has just finished a road tour with Farzana Doctor — interviewed here this past summer. The "God Loves Pavement" tour, a mash up of the titles of the books they were promoting, Vivek's God Loves Hair and Doctor's Six Degrees of Pavement, spanned seven cities in Canada and the U.S.

Shraya and Doctor also started an entertaining tour Tumblr where they posted regular updates, images, event details and a series of delightful short videos called "Brown Moments." (More on that below.) On one level, the blog functions as it should, to keep readers informed of their whereabouts and as a charming memoir of their time together. But it's also a helpful tutorial for other authors seeking a case study on what it means to report from the road, engage an audience and which tools work best.

Julie Wilson: How did you and Farzana decide that it would be feasible (and survivable) to road tour together?

Vivek Shraya: Farzana and I were both invited to do a reading at London Pride last summer that involved a five hour drive. Farzana offered to do the driving on one condition: I was to entertain her with my entire life story. I clearly wasn’t able to satiate her desire, as shortly after that reading, she approached me with the idea for the tour.

Touring together was a bit of a no-brainer because we are both queer and South Asian; these intersecting identities are explored in our individual books. Spaces/events dedicated to South Asian/queer voices and stories are still rare, so from a marketing perspective, it made sense to highlight these themes because they made our tour unique.

Discussions about being brown surfaced a lot on tour, with each other and Farzana’s family. Audience members/organizers expressed excitement about our stories and our events because it meant they were not the only brown bodies in the room. We highlighted some of our favourite "Brown Moments" on our Tumblr page, such as Farzana's cousin telling us her favourite phrase.

JW: Where did the tour take you? And how did you decide on your stops? 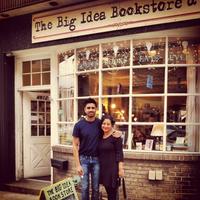 The biggest consideration for where to stop was accommodation. Hotels are expensive. We were really fortunate that Farzana has a large family with relatives in many cities who generously offered to host us. Having friends/family/contacts in cities also increases the likelihood of attendees at events. In Westwood, for instance, Farzana’s aunt invited her entire, and very large, social network to the reading.

You also have to consider the geographical distance from one city to another. We knew we had a reading in Chicago and given the distance from our other booking in Washington, it made sense to stop in between (Pittsburgh).

Beyond that, we tried to look for cities with queer/LGBT/South Asian organizations and/or venues such as KhushDC, Trikone Chicago and Giovanni’s Bookstore for potential partnership/sponsorship.

JW: Tell me about your tour Tumblr and what components make for a great tour page.

VS: I am fond of a clean and minimal aesthetic for my websites. Most of us have busy lives and short attention spans, so information needs to be presented in a way that is immediately accessible, without a lot of clutter, while also being eye-catching. This was one of the main reasons we approached the illustrator of God Loves Hair, Juliana Neufeld, to do our press photos and tour poster. We knew she could capture the lighthearted spirit of the tour. From there, my brilliant webmaster, Simon Crowley, was able to carry out these themes into the Tumblr site. 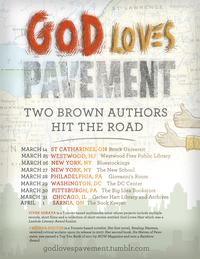 We also knew the site needed to have our author bios, book bios, downloadable high res images and individual tour posters for press/venues. We also created and included Facebook event pages for each stop; Facebook is key for how people hear about and discuss upcoming events.

The wonderful thing about Tumblr specifically (versus a traditional website) is that an individual can follow your page, reblog their favourite posts which then is viewed by their readership. It's immediate word-of-mouth beyond your own circle of followers.

JW: What tips can you offer the touring author to make the tour more survivable and affordable?

VS: Our #1 touring discovery was free Wi-Fi at McDonald's. We spent hours in McDonald's parking lots, catching up on emails, looking up addresses, Tweeting, Facebooking and essentially ignoring each other. Beyond that:

JW: Talk about social media and Twitter in particular. How are you using #godlovespavement?

VS: Before the tour, Farzana tweeted press outlets in all the tour cities about the corresponding events, which, occasionally, surprisingly, resulted in actual press! At readings, we also encouraged audience members to tweet about their thoughts on the event using the hashtag, which we offered to retweet later. Using Twitter this way allowed us to further engage/connect with attendees post-readings while also building buzz for the tour.

Another Twitter activity we tried out was asking students at the St. Catharines reading to tweet the worst mistake of their lives using the #godlovespavement hashtag. (The tagline for Farzana’s book is “How do you get over the worst mistake of your life?”). During the Q&A we had students voluntarily share their tweets and this ended up deepening the discussion.

We were also fortunate to have some of the hosts of upcoming readings tweet/use the hashtag in advance to promote the event, which allowed us to playfully engage with them in advance.

JW: How are you using other media? And how active are you in creating it?

VS: Because I am a multimedia artist, I am constantly brainstorming different ways to express myself, and as an audience member with a very short attention span, I really appreciate events that employ a number of mediums. My readings, for instance, generally involve projecting the illustrations from the book and singing snippets of pop songs and/or Hindu prayers.

This crosses over into my approach with self-promotion and understanding the importance of visuals (posters, photos from "the road," etc.) and video (teasers, vlog entries, etc.) as a way to capture interest and excitement for an event. I don’t always directly create the materials used, as I highly value the collaborative process, but I am also a control freak and like being a part of every aspect of what I present, even if only via discussion/suggestions.

JW: If you could list the five things an author needs to perform easy self-promo, what would those be?

VS: These are my essentials. 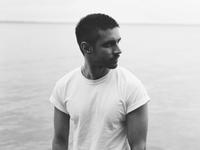 Vivek Shraya is a Toronto-based multimedia artist. Winner of the We Are Listening International Singer/Songwriter Award, Vivek has released albums ranging from acoustic folk-rock to electro synth-pop.

God Loves Hair, his first collection of short stories, was a 2011 Lambda Literary Award finalist, won the Applied Arts Award for Illustration in 2010, and is currently being used as a textbook at several post-secondary institutions. Vivek also creates and delivers workshops and guest lectures about writing, art, gender, sexuality and homophobia.

Vivek has performed and read at shows and festivals internationally, sharing the stage with Tegan and Sara, Dragonette, and Melissa Ferrick, and appearing at NXNE, CMW and Word on the Street. His music has also been featured on the TV show Degrassi.